Nokia has joined the bandwagon of Smartphones, with not one, but two big screen handsets, one among them being Lumia 1320.  The old Nokia Lumia 1520 has been doing well with its affordable pricing and better looks, however, Lumina 1320 is relatively more affordable with a price of Rs 23,999. 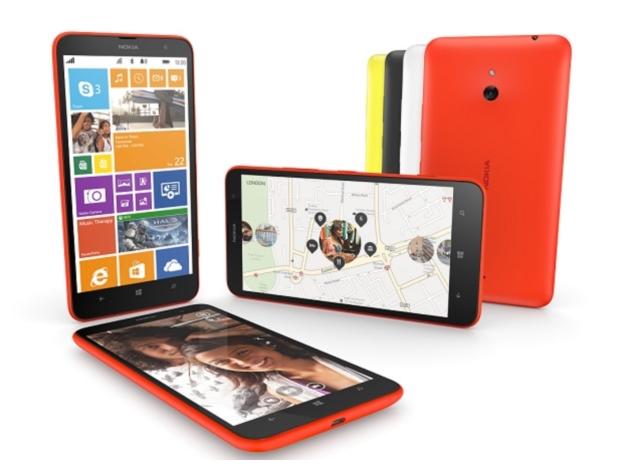 The most prominent highlight of Lumia 1320 is its 6 inch screen, which is quite decent in terms of size as compared to the competitive brands.  It has a 720p resolution and uses Nokia’s Clear-Black Display Technology.  Until and unless you are reading eBooks from a close distance, the colors looks vibrant and images and videos are pretty crisp.  It is widely opined that Lumina 1320’s BIG SCREEN is its biggest user asset and is in fact, very good.  The size of the screen is big enough to watch videos and surf web pages.  What more important could it be than a big and high resolution screen on your phone.

Most of the reviews about Lumia1320 claim a little weird and uncomfortable design for the phone.  Some feel that it somewhat looks like an oversized Lumia 625.  The bigger screen makes the model a little too big to handle.  Although, due to the curvy shape it slips easily into your pocket, but it’s not really comfortable to handle, especially while holding in your hand.  Moreover, not much innovative has been done for the keypad.  It looks all the same like other Lumia models.  Another flaw it shows is that the charged is pinned near camera and while connecting to charge, you might usually touch the camera button.

Software loaded on the phone:

Similar to all the Nokia Smartphone models, Lumia 1320 runs on preloaded Windows Phone 8 Operating system.  The preloaded recent Black and slightly older GDR3 updates make windows Phone 8 a slightly better OS, brining multitasking and more control over features.  The user interface looks to be tweaked a little bit and can have up to six small Live Tiles on the home screen.  However, if this is what you look for, you may get some good Android Smartphone priced around the Nokia Lumia 1320 price in India.

One of the biggest drawbacks observed for this model is the camera.  It is not really understandable why such a big brand would need to compromise on the quality of its camera.  When the phone is priced at Rs 24,000, there could have been better options rather than using a 5 MP camera.

Performance, again is a strength of Lumia 1320:

Nokia Lumia 1320 is quite fast and smooth as compared to other Smartphones of the same price range.  For people who are not crazy about looks and want to use the phone for productive purposes, it would be a good buy.  Nokia and Samsung have always leaded the market for their battery backup.  Lumia 1320 has excellent battery backup and could be called as ‘better than the best’ in terms of battery backup.

Inferior camera quality and irregular design may force Lumia 1320 out of the race.  However, people who care for performance and battery backup of a phone may still cling to Nokia Lumia 1320.

Lynne is a Electronics and Technology Enthusiasts. She has been written many reviews on latest Electronics Gadgets and Devices.